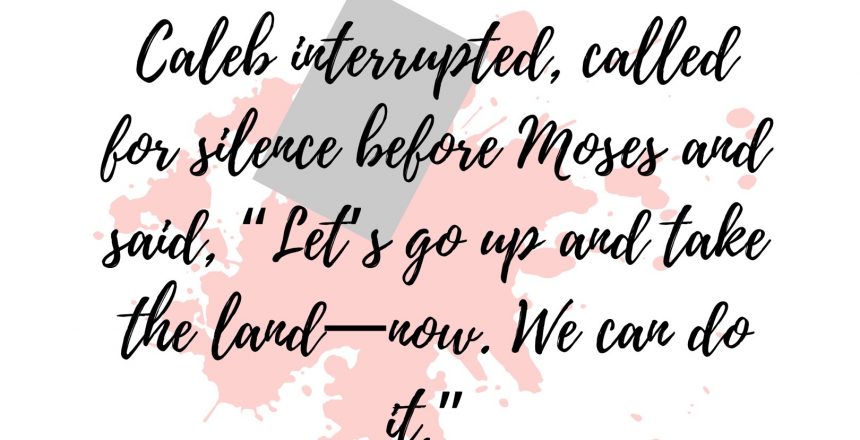 “Caleb interrupted, called for silence before Moses and said, “Let’s go up and take the land now. We can do it”. Num.13:30

What could be so urgent that Caleb had to interrupt a meeting with Moses and the people and called for silence? A  distorted perspective of the land that God had promised and an internal vision of themselves that was equal to that of a grasshopper.
Their lack of clarity, robbed them of the capacity to fight for their future that was promised to them. Caleb could not tolerate this negative narrative and had to call for silence! He challenged them in their perception and capacity. Caleb refused to give in to groupthink and was grounded in the promises of God.

I want to encourage you this week to embrace the silence of an interrupted conversation that you need to have with yourself and God. What is the flow of your thinking patterns when it comes to your internal view of yourself? What are the promises and vision that God has placed inside of you that you are not willing to fight for because of a negative internal narrative? Allow God to show you the truth.

1.What is the truth your are telling yourself about who you are?
2. How do you see the connection between a healthy view of self and the purposes and plans that God is inviting you into?

Prayer:
Father, we invite you to interrupt our conversation!  We want to move forward with healthy thinking patterns and we want to embrace all that you have for us. Heal us from any distortions when it comes to our identity. We want to be rooted and grounded in your love. Give us the courage and boldness to fight for our future.   We love You! In Jesus name, Amen!

Our mission is to live out the truth of God’s love, and to serve our community.