Slavery & Racism In The Bible 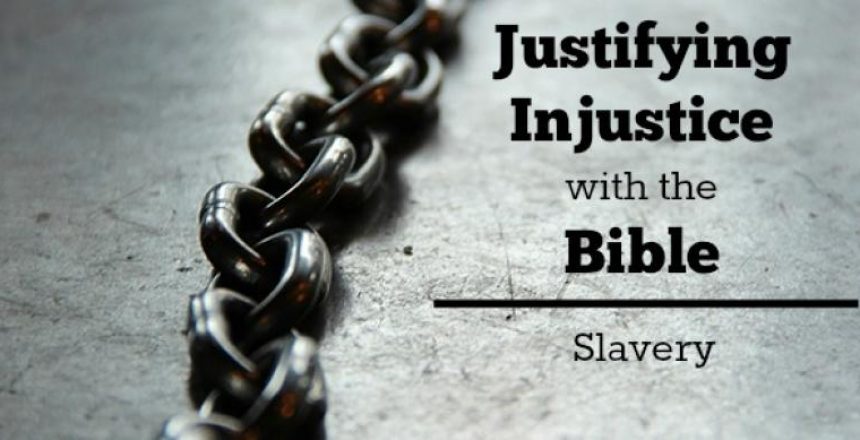 What The Bible Says About Slavery & Racism

Slavery in the Old Testament

People in the Old Testament times became slaves in a variety of ways: they were born to enslaved parents (Genesis 17:23), purchased as slaves (Genesis 37:28), or sold themselves to pay a debt (Leviticus 25:39–55).
Breaking into a home was punished by enslavement (Exodus 22:3), and prisoners of war were commonly enslaved (Joel 3:6). Even the Israelites enslaved the Canaanites they conquered in the Promised Land (Judges 1:28).
Simply put slaves in Israel were considered property to be bought and sold (Exodus 21:32). However, they were granted protection against murder, permanent injury, or undue physical labor (Exodus 21:20,26; 23:12). In fact Hebrew household slaves were included at all religious meals (Exodus 12:44). Such privileges and protections were otherwise extremely rare in the ancient world.

But why did the Old Testament not condemn this practice?

In many ways, the practice of slavery was condemned. That is why there were several ways a Hebrew slave could be freed. An individual could be purchased and set free (Exodus 21:8). A slave that was permanently injured by his master was to be set free (Exodus 21:26). Hebrews were also to be held as slaves for no longer than six years and freed on the seventh (Deuteronomy 15:12). The Jubilee Year, which occurred every forty-nine years, was to free all Israelite slaves regardless of how long they had served (Leviticus 25:50).

It’s clear that in the Old Testament, what we see regarding slavery are laws that minimized the evil of slavery, by protecting slaves from physical harm, and provided for their eventual freedom. However, it is in the New Testament that we are provided with God’s complete word on the subject.

Slavery in the New Testament

In the Old Testament era, people were enslaved primarily through war. But in the first century AD, the number of slaves, swelled mainly due to procreation. In fact, many people actually sold themselves into slavery to improve their lives at this time.

Owning and using people as slaves was so common in the Roman Empire that not a single Roman writer condemned the practice. But this acceptance of slavery would begin to change with the growth and influence of Christianity. Slavery in the Roman era was dramatically different from the despicable practice in American history. If you walked through any first-century Roman city, you would not be able to tell most slaves from free people. Slaves performed manual labor, but they were also doctors, nurses, household managers, and intellectuals. They managed finances and cities. They were often given an excellent education at the expense of their owners, with the result that philosophers and tutors were typically slaves.

Even more amazing to us, it was common for people to sell themselves into slavery to secure such privileges. A person who wanted to be a Roman citizen could sell himself to a citizen and then purchase his freedom over time served.

While there is no doubt that many slaves were abused physically, sexually, and socially, many were part of the more privileged strata of society. The total dependence of the Roman economy upon the labor of slaves made it impossible for the ancient world to conceive of abolishing slavery.

As a result, no New Testament writer attempted to end slavery itself, as this was not possible in their time. But several other facts should be noted as well.

One: Paul abolished all racial and social discrimination for Christians:

Paul appealed to Philemon to see his slave, Onesimus, “no longer as a bondservant but more than a bondservant, as a beloved brother” (Philemon 16). His intention here was not just in getting him to see him a brother, but to have him set free.

Three: The New Testament church gave those who were enslaved a family and a home.

This was one reason why so many of the earliest believers were slaves. Pastors, Prophets, Teachers, Evangelists and church leaders came from both the ranks of slaves and free. Christians made no distinction between the two, for their Heavenly Father welcomed all as his children.

Four: Not a single New Testament leader owned slaves, even though many had the resources to purchase them.

Racism And The Bible

The Bible clearly condemns all forms of racism and views every person as equally valuable.

One: We Are All Created By God.

The human story begins in Genesis 1, where God “created man in his own image, in the image of God he created him; male and female he created them” (v. 27). Every person is created intentionally by God in his own divine image. Thus, every person is sacred and equally valuable. Every form of racism, by definition, is to be rejected.

Two: We Are All Descended From The Same Parents.

Every human being is descended from Adam and Eve (Genesis 1:28). As a result, “The man called his wife’s name Eve, because she was the mother of all living” (Genesis 3:20). As Scripture notes, the Lord “made from one man every nation of mankind to live on all the face of the earth” (Acts 17:26). Because of the Flood, all of humanity can trace our ancestry to Noah as well (Genesis 9:1).

Three: Every Person Is Equally Valuable To God.

As noted earlier, Paul stated boldly: “There is neither Jew nor Greek, there is neither slave nor free, there is no male and female, for you are all one in Christ Jesus” (Galatians 3:28). This reminds us all that every form of racism known to Paul’s day was invalid and sinful.

Four: Each Person Is Equally Welcome To Salvation In Christ.

God loves all sinners and wants all to come to faith in his Son: “God shows his love for us in that while we were still sinners, Christ died for us” (Romans 5:8). Our Lord “is patient toward you, not wishing that any should perish, but that all should reach repentance” (2 Peter 3:9);(John 3:16). When we trust in Christ, we become one people: “He himself is our peace, who has made us both one and has broken down in his flesh the dividing wall of hostility” (Ephesians 2:14).

Five: We Are To Love All People Unconditionally.

God’s word is blunt: “If you show partiality, you are committing sin and are convicted by the law as transgressors” (James 2:9). “Partiality” means to show favouritism or prejudice, to treat one person as inherently better than another. Such prejudice is “sin” (Leviticus 19:34).

Jesus taught us: “Whatever you wish that others would do to you, do also to them, for this is the Law and the Prophets” (Matthew 7:12). We are to “love your neighbor as yourself” (Matthew 22:39, quoting Leviticus 19:18).

One: What About The “Mark of Cain”?

The Hebrew word translated “mark” is often, referring to a sign or token. It is used eighty times in the Old Testament; not once does it refer to skin color. Nonetheless, some have identified this “mark” with being black. Since Cain was cursed for his sin against his brother, it was claimed that those whose skin was black were his descendants and were cursed by God. This claim was used to justify the enslavement of Africans.

This line of reasoning is completely wrong. As noted, the “mark” of Cain had nothing to do with his skin color. In addition, Cain’s family line probably died in the Flood.

It is important to note, that Moses married Zipporah a “Cushite woman” (Numbers 12:1). Cush was a region south of Ethiopia; its people were known for their black skin (Jeremiah 13:23). When Moses’ brother and sister spoke against him for marrying his Cushite wife, God rebuked them and Miriam was made white with leprosy (Numbers 12:4–15). Clearly, the “Mark of Cain” has nothing to do with black people.

Two: What About The “Curse of Ham”?

Ham was one of Noah’s three sons. Ham had four sons: Cush, Egypt, Put, and Canaan (Genesis 10:6). Ham is considered the father of black people, since some of his descendants settled in Africa.

According to tradition, Cush settled in Ethiopia, south of Egypt; Egypt (also known as “Mizraim”) settled in the land of Egypt; Put settled in Libya; Canaan settled above Africa and east of the Mediterranean Sea.

The Bible tells us that after the Flood, Noah became drunk (Genesis 9:21). Then “Ham, the father of Canaan, saw the nakedness of his father and told his two brothers outside” (v. 22). Shem and Japheth “covered the nakedness of their father” (v. 23). After Noah awoke, he said, “Cursed be Canaan; a servant of servants shall he be to his brothers” (v. 25).

Nonetheless, the Old Scofield Reference Bible of 1909 (often considered the authoritative Bible of fundamentalist Christians) interprets Genesis 9:24–25 to teach: “A prophetic declaration is made that from Ham will descend an inferior and servile posterity.”

It is important to note that biblical curses are limited to three or four generations (Exodus 20:5) and are reversed when people repent and return to obedience (Exodus 20:6). Scripture consistently rejects the claim the black people (or any people) are inferior to any other.

Three: Didn’t Slavery Proponents Use The Bible to Justify Their Position?

Tragically, many who supported slavery used the “Mark of Cain” and “Curse of Ham” to justify their position. They also noted biblical statements encouraging slaves to obey their masters (Ephesians 6:5).

Like any other book, the Bible can be misused by those who manipulate and misrepresent its teachings. In responding to racists who misused the Bible to justify slavery, we should blame the racists, not God or the Word of God.