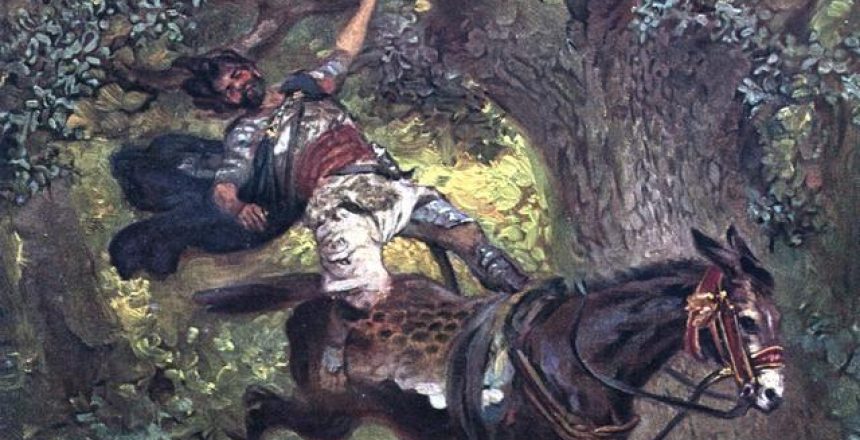 Absalom, the third son of King David by his wife Maacah, seemed to have everything going for him, but like other tragic figures in the Bible, he attempted to take what was not his. Absalom’s story is one of pride and greed, about a man who tried to overthrow the plan of God. Instead, his life ended in a violent downfall.

Known for: Absalom in the Bible was the third son of King David. Instead of imitating his father’s strengths, Absalom followed his pride and greed and tried to seize his father’s throne.
Bible References: Absalom’s story is found in 2 Samuel 3:3 and chapters 13-19.
Hometown: Absalom was born in Hebron, during the early part of David’s reign in Judah.
Father: King David
Mother: Maacah
Brothers: Ammon, Kileab (also called Chileab or Daniel), Solomon, unnamed others.
Sister: Tamar

The Story of Absalom

The Bible says Absalom was praised as the most handsome man in all Israel: “He was flawless from head to foot.” (2 Samuel 14:25, NLT) When he cut his hair once a year—only because it became too heavy—it weighed five pounds. It seemed everyone loved him.

Absalom had a beautiful sister named Tamar, who was a virgin. Another of David’s sons, Amnon, was their half-brother. Amnon fell in love with Tamar, raped her, then rejected her in disgrace.

For two years Absalom kept silent, sheltering Tamar in his home. He had expected his father David to punish Amnon for his act. When David did nothing, Absalom’s rage and anger seethed into a vengeful plot.

One day Absalom invited all the king’s sons to a sheep-shearing festival. When Amnon was celebrating, Absalom ordered his soldiers to kill him.

After the assassination, Absalom fled to Geshur, northeast of the Sea of Galilee, to the house of his grandfather. He hid there for three years. David missed his son deeply. The Bible says in 2 Samuel 13:37 that David “mourned for his son day after day.” Finally, David allowed him to come back to Jerusalem.

Gradually, Absalom began to undermine King David, usurping his authority and speaking against him to the people. Under the pretense of honoring a vow, Absalom went to Hebron and began to gather an army. He sent messengers throughout the land, proclaiming his kingship.

When King David learned of the rebellion, he and his followers fled Jerusalem. Meanwhile, Absalom took advice from his counselors on the best way to defeat his father. Before the battle, David ordered his troops not to harm Absalom. The two armies clashed at Ephraim, in a large oak forest. Twenty thousand men fell that day. The army of David prevailed.

As Absalom was riding his mule under a tree, his hair got entangled in the branches. The mule ran off, leaving Absalom hanging in the air, helpless. Joab, one of David’s generals, took three javelins and thrust them into Absalom’s heart. Then ten of Joab’s armor-bearers circled Absalom and killed him.

To his generals’ surprise, David was heartbroken over the death of his son, the man who tried to kill him and steal his throne. He loved Absalom dearly. David’s grief showed the depth of a father’s love over the loss of a son as well as regret for his own personal failures which led to many family and national tragedies.

These episodes raise disturbing questions. Did Absalom murder Amnon because David had failed to punish him? The Bible does not give specific answers, but when David was an old man, his son Adonijah rebelled in the same way Absalom had. Solomon had Adonijah killed and executed other traitors to make his own reign secure.

Absalom was charismatic and easily drew other people to him. He possessed some leadership qualities.

He took justice into his own hands by murdering his half-brother Amnon.

Then he followed unwise counsel, rebelled against his own father, and tried to steal David’s kingdom.

He believed that his charisma was an indication of his ability to lead, even though he lacked the necessary character to do so.

Absalom imitated his father’s weaknesses instead of his strengths. He allowed selfishness to rule him, instead of God’s law. When he tried to oppose God’s plan and unseat the rightful king, destruction came upon him.

2 Samuel 15:10 Then Absalom sent secret messengers throughout the tribes of Israel to say, “As soon as you hear the sound of the trumpets, then say, ‘Absalom is king in Hebron.’” (NIV)