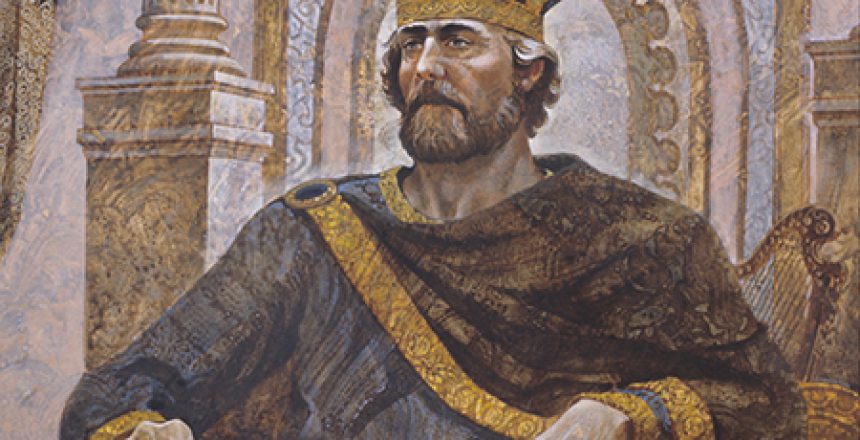 King David was a man of contrasts. At times he was single-mindedly devoted to God, yet at other times he failed miserably, committing some of the most serious sins recorded in the Old Testament.

David lived a frustrating life, first in the shadow of his brothers, then constantly on the run from vengeful King Saul. Even after he became king of Israel, David was engaged in almost constant warfare to defend the kingdom. King David was a great military conqueror, but he could not conquer himself. He allowed one night of lust with Bathsheba, and it had disastrous consequences in his life.

Although King David fathered Solomon, one of Israel’s greatest kings, he was also the father of Absalom, whose rebellion brought bloodshed and grief. His life was a roller coaster of emotional highs and lows. He left us an example of the passionate love of God and dozens of psalms, some of the most touching, beautiful poetry ever written.

David killed Goliath, champion of the Philistines when he was only a youth and Goliath a giant and veteran warrior. David was victorious because he trusted not in himself, but in God for the victory.

In battle, David killed many of Israel’s enemies. But he refused to kill King Saul, despite several opportunities. Saul, God’s first anointed king, pursued David out of mad jealousy for years, but David would not raise a hand against him.

David and Saul’s son Jonathan became friends, like brothers, setting a model of friendship that everyone can learn from. And as a model of faithfulness, King David is included in the “Faith Hall of Fame” in Hebrews 11.

David was an ancestor of Jesus Christ, the Messiah, who was often called “Son of David.” Perhaps David’s greatest accomplishment was to be called “a man after God’s own heart” by God himself.

David was courageous and strong in battle, trusting in God for protection. He remained loyal to King Saul, despite Saul’s crazed pursuit. Throughout his entire life, David loved God deeply and passionately.

King David committed adultery with Bathsheba. He then tried to cover up her pregnancy, and when he failed with that, he had her husband Uriah the Hittite killed. This was the greatest transgression of David’s life.

When he took a census of the people, he willfully violated God’s command not to do that.

King David was often lax, or absent as a father, not disciplining his children when they needed it.

David’s example teaches us that honest self-examination is necessary to recognize our own sin, and then we must repent of it. We may try to fool ourselves or others, but we cannot hide our sin from God.

Even though God always offers forgiveness, we cannot escape the consequences of our sin. David’s life proves this. But God highly values our faith in him. Despite life’s ups and downs, the Lord is ever-present to give us comfort and help.

David hails from Bethlehem, the City of David in Jerusalem.

Reference to King David in the Bible

David was a shepherd, warrior, and king of Israel.

1 Samuel 17:50So David triumphed over the Philistine with a sling and a stone; without a sword in his hand he struck down the Philistine and killed him. (NIV)

1 Samuel 18:7-8As they danced, they sang: “Saul has slain his thousands, and David his tens of thousands.” Saul was very angry; this refrain displeased him greatly. “They have credited David with tens of thousands,” he thought, “but me with only thousands. What more can he get but the kingdom?” (NIV)

1 Samuel 30:6David was greatly distressed because the men were talking of stoning him; each one was bitter in spirit because of his sons and daughters. But David found strength in the LORD his God. (NIV)

2 Samuel 12:12-13Then David said to Nathan, “I have sinned against the LORD.” Nathan replied, “The LORD has taken away your sin. You are not going to die. But because by doing this you have shown utter contempt for the LORD, the son born to you will die.” (NIV)

Psalm 23:6Surely your goodness and love will follow me all the days of my life, and I will dwell in the house of the LORD forever. (NIV)