Three Marks Of A Great Man 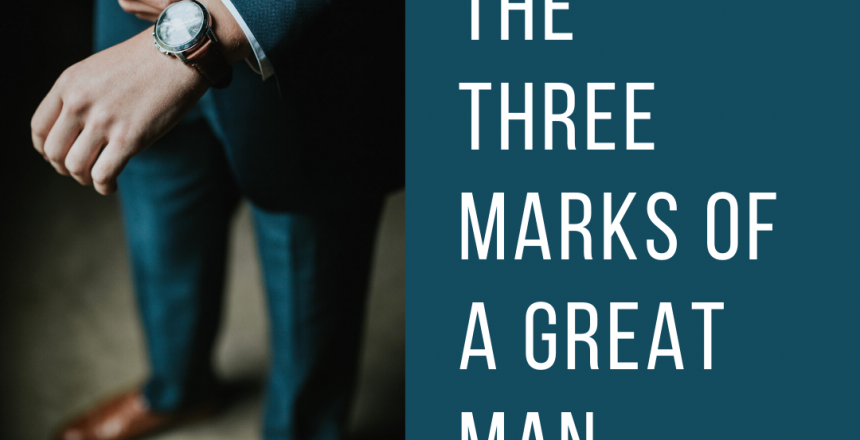 The journey of a man is often lived by proving himself worthy. A man understands worth through the lens of success. So he sets out on a journey to achieve, fixing what is broken along the way always proving to himself and others that he is worthy of respect and honor.

We read in 1 Corinthians 1:5,7 (ESV); that the Corinthian Christians excelled in three areas: “5 that in every way you were enriched in him in all speech and all knowledge—7 so that you are not lacking in any gift, as you wait for the revealing of our Lord Jesus Christ,”.

In spite of having 3 Marks of Spirituality: 1) Eloquent Speech, 2) Knowledge of the Scriptures and World, and 3) many Gifts and Talents. Although they possessed all these attributes, they were still not considered spiritual or even great men.

Jesus also said that in the day of judgment many would come before Him and say that they had prophesied and done miracles in His Name. But He would reply that He never knew them (Matthew 7:22-23). They called Jesus “Lord” and had supernatural powers. But there was sin and distance of relationship in their lives.

This shows us clearly that “Christian” activity and even supernatural gifts do not make a man spiritual. In fact, they are not even an indication that a man is spiritually reborn.  Jesus our Lord told these people that He NEVER knew them.

To understand what makes a man spiritually great, we are taken in a different direction by Jesus. Here are Three Marks of A Great Man:

In Luke 5 (ESV) we read; 4 And when he had finished speaking, he said to Simon, “Put out into the deep and let down your nets for a catch.” 5 And Simon answered, “Master, we toiled all night and took nothing! But at your word I will let down the nets.” 6 And when they had done this, they enclosed a large number of fish, and their nets were breaking. 8 But when Simon Peter saw it, he fell down at Jesus’ knees, saying, “Depart from me, for I am a sinful man, O Lord.”

Like Peter we can work hard and try everything to be successful. We may even succeed on our own like the Corinthians did or the believers that performed miracles in Jesus name, but weren’t known by Him. But when we listen to Jesus’ instructions our “nets” can’t even hold the blessing that awaits. Our lives must be guided by a core set of principles and values that come from God. Whatever we do in life is the direct result of what beliefs we have and follow in life’s circumstances. We can struggle or succeed our way, but when we listen to Jesus, we are blessed God’s way.

A man’s life can be described as a journey where in the first half we go about proving ourselves and in the second stage real questions appear. Such as; What is wrong with me? With Other?, With Society? How do I move from Brokenness to wholeness? It is here that we are invited to deal with the wound of the heart. Most often, there is often no greater wound than the wound of an absent father.

In Mark 11:25 (ESV) it says; 25 And whenever you stand praying, forgive, if you have anything against anyone, so that your Father also who is in heaven may forgive you your trespasses.”

In Proverbs 17:9 (NLT) it says; Love prospers when a fault is forgiven, but dwelling on it separates close friends.

This isn’t the only verses that encourages us to go first there are many others (Ephesians 4:32; Matthew 6:14; Colossians 3:13; Luke 6:37; Matthew 5:23-24; 6:15; 18:21-22; Hebrews 8:12; 1 John 1:9). Only a spiritually immature person would allow themselves to be consumed with unforgiveness. When you are the first to forgive this elevates your status like nothing else can. Not just in front of the transgressor but before God where it matters most. There’s a blessing that comes into and through your life that is unmatched when you do.

3. A Great Man Cares For The Marginalized

A great man is one who realises that God has blessed him in order that he might be a blessing to others. Since God has forgiven him much, he gladly and readily forgives all who have harmed him. Since God has been so good to him, he is good to others too. He has received freely from God and he gives freely to others.

A spiritual man is genuinely concerned for the welfare of others. He is filled with compassion for the lost and suffering humanity and can never ignore a brother whom he sees in any need – like the Levite and the priest did, in the parable of the good Samaritan (Luke 10:30-37).

Luke 10:38 (NLT) 38 And you know that God anointed Jesus of Nazareth with the Holy Spirit and with power. Then Jesus went around doing good and healing all who were oppressed by the devil, for God was with him.

We cannot accept the excuse or give the explanation that we are too busy or the work we have to do is more important. That is the mistake that the others made in story of the Good Samaritan that stopped and helped instead. It’s never about “having time”,  it’s about “making time”. Jesus lived and ministered in the margins, he went to those no one went to. He did what others thought would make them “unclean”. Nothing makes us more “unclean” than ignoring the marginalized.

The Three Marks of A Great Man:

PrevPreviousThe Silence & Solitude Of Prayer
NextDoes God Answer All Prayers?Next
Back to Blog